Oh boy — been a while since I’ve updated this thing. Don’t need to get super-personal, but suffice it to say the past couple weeks have been CRAZY busy. I had a couple conferences to go to, I made a trip to an airport, I hosted my parents and brother at my house to make some much-needed home repairs and updates for five days — it has been crazy.

So, just wanted to ease back into this and give you reviews on not just one, but two books I recently read. I polished off Stefan Bolz’s new book The Fourth Sage about a week ago and then devoured Ernie Lindsey’s Super over the past 24 hours. Both were tremendous and are showcasing how independent authors are putting out outstanding work.

Earlier this year, I read Stefan Bolz’s previous book, The Three Feathers. I thought it was outstanding with a unique voice in a sea of books with generic personalities and stock plots. With The Fourth Sage, Stefan has proved that he is not a one-trick pony and has continued his specific brand of writing to a futuristic world inhabited by Aries and her friends.

In The Three Feathers, Bolz really put a lot of emphasis on fate and destiny to go along with a heavy dose of supernatural and spirituality. There are recurrences of those themes here as well, but with the futuristic corporate society, the metaphysical side is tempered with the science and technology found in Aries’ world. I really enjoyed reading The Fourth Sage and kept rooting for Aries and her friends, even as the deck was continuously stacked against them. Sacrifices are necessary for journeys like Aries’ to succeed, but sacrifice doesn’t always mean the same thing.

There is a positivity present in Bolz’s work that you don’t find in other author’s books. In a post-apocalyptic, authoritarian society, you would expect to find death and depression around every turn, but for some reason, whenever Aries, her winged friend, Born of Night, or any of her numerous friends appear on the page, it is difficult to not smile and know that somehow, someway, their destiny is to survive and even thrive.

Stefan has planned more books in this series and I am very much interested in reading the future installments. Fantastic book, Stefan — good work.

Perhaps the best movie I’ve seen this year was Captain America: Winter Soldier. One of the best things about the narrative of CA2 was the idea that the government (S.H.I.E.L.D.) was directly funding and operating superhero missions around the world. The implications of that, specifically when you combine it with NSA data mining and Edward Snowden, made the movie much more than a superhero flick — it became a modern allegory for our world with Captain America representing the American ideal. 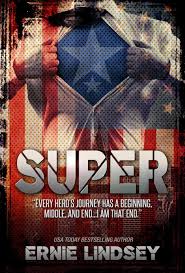 I didn’t come into reading Ernie Lindsey’s Super with CA2 in mind, but it is hard to distance yourself too much from it after finishing and realizing the complex web Lindsey wove to get to the ending of the book. The protagonist, Leo Craft, is a Superhero Assassin, a distinction he makes at one point to say the Support Group is joins is not superheros that are assassins, but rather people who assassinate superheroes. At first, this sounds terrible, until Lindsey carefully reminds the reader that no one is perfectly good or evil — that shades of grey exist. For some heroes, those shades are lighter, but for others, those shades take on tones of child pornography, abuses of their powers, and betrayal of their countries. For some of those, Craft takes out retribution.

It seems Craft is perfect at his job, but gets a little lazy and doesn’t realize who he hopped into bed with on his latest assignment. From there, the government twists and turns with numerous agencies and multinational organizations takes center stage with Lindsey expertly leaving the reader wanting more at each chapter break. This is one book that I genuinely had a hard time putting down and when my Kindle ran out of battery life, I had to bide my time until it was ready for me to finish the book off.

I thought Lindsey did a great job and left the world open and ripe to numerous other stories or sequels, each of which I would gladly purchase and read. Well done!